Tale of the Buds from a Burning Bush

If a Burning Bush could talk, what would it say? As a flight of fancy, here is what I imagined it would say if it could actually talk. 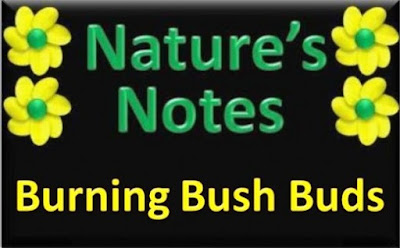 If these buds from a Burning Bush could talk, what do you think they would say?

Introduction: If the buds of a Burning Bush could actually talk, what do you think it would say?

As a flight of fancy, so to speak, here is one possible monologue that you might hear if you happened to converse with the buds growing on the Burning Bush right in front of our log cabin. That was the home I used to share with my husband back when he was alive.

In case you’re wondering, we used to live in a log cabin out in the country. The little town we lived in was called Mosheim of Greene County, Tennessee. Mosheim was so small, it didn’t even have a red light.

We lived in a log cabin that had one house on either side of us (both vacant at the time), two houses quite a ways distant behind us, but nothing but fields in front of us. Those fields were always full of cows.

So back to my little flight of fancy of what the buds on a Burning Bush plant might say if it could actually talk.

This was something I wrote back in 2011. The photos were taken in February of 2011. It was a little promise that spring was truly on its way. It also was me celebrating the fact that I was in full remission from breast cancer. I was actually bald in 2010. If you check out my photo, you can see that I have hair in abundance as of 2019. God is so very good in countless different ways! 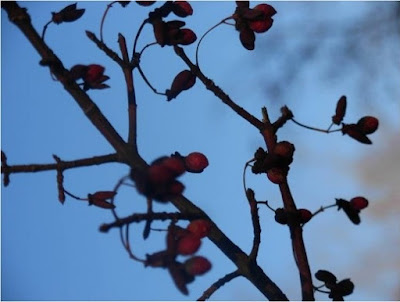 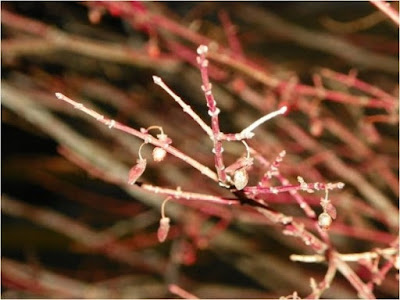 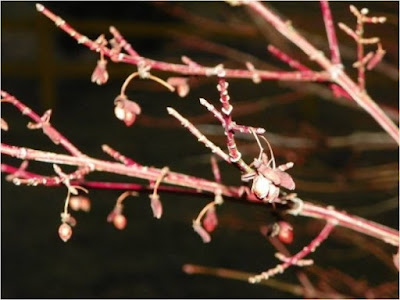 So here we go, back to my little flight of fancy of what the buds on a Burning Bush plant might say if it could actually talk.

I sit right outside your front door, mostly ignored by your husband and you.

Each day, as one or the other of you go in and out, I am sharing my story, in the only way I know how, with color and scent and shape and contours. Rarely, do you see. Rarely, do you stop and acknowledge and enjoy.

What is that phrase I hear in your mind as you scribe my words? Ah, yes, rarely do you "stop and smell the roses."

Haven't you learned that real life is made up of many of those moments?

The good news, as is indicated by my buds on this Burning Bush, that life is also about new beginnings and second chances.

Yes, I now hear you think of another couple of wise phrases: "Start again with a clean slate" and "Today is the first day of the rest of your life."

Last year, in 2010, as you focused your energy on overcoming breast cancer, you saw many things as perhaps that would be the last time you saw it.

This year, in 2011], with breast cancer being an overcome condition of your past, you now come closer to resembling my current status more than you have in several decades.

You are a tiny bud in its gestation period seeking to create, as you once heard on that Oprah show you sometimes make the time to watch, "a new normal."

This is the beginning of a new decade, a new life, as you recreate a new you on the other side of cancer. Scribing my words is perhaps part of this new life.

Then, take a little baby step into a bit of the unknown. Embrace the gift of your sixth sense to be able to sense or intuit the messages that all of nature would like to convey to you and others.

You will be enriched. Your life will be fuller. That is part and parcel of reveling in God's grace. Go in peace.