During the pandemic, I am taking taste-bud journeys as I self-isolate rather than physical journeys. Here is my recipe for Baked Ham. This was my mom's recipe. She would always serve it with Scalloped Potatoes. Yum! 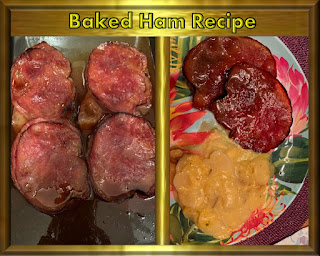 My mother always made Scalloped Potatoes from scratch. That is the way I used to do it, as well. But with the pandemic and a lot of laziness on my part, I discovered a box mix that I personally really like: Idahoan Au Gratin Homestyle Casserole 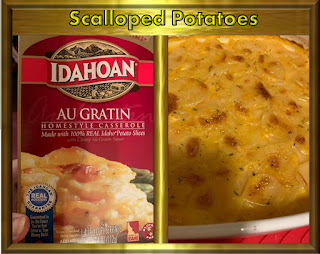 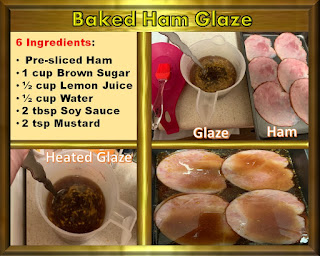 Please note: To make it simpler, I mix the glaze in a large microwave-safe measuring cup. Then, I heated the glaze for 2 and 1/2 minutes.

Please also note: This recipe has been doubled since I wanted to make certain that all the ham would get fully saturated with the glaze while cooking.

Alternate Procedure #2: If the ham is from deli and pre-cooked and you are also preparing a veggie that requires baking such as Scalloped Potatoes try this instead:


Please note: Since I order groceries on-line and have them loaded into my car, I had no opportunity to discuss typing together a sliced ham with a string. Therefore, I had multiple pre-sliced ham pieces that I wished to have covered with glaze.

Please also note: So, as you might have observed with the above photo, I laid down one layer of ham at a time and basted each layer with glaze prior to topping it with another layer of ham. And so forth. Then, a poured the rest of my glaze on top of all of it since I personally best enjoy baked ham swimming in this glaze as it cooks.