This is part 2 of 4 blogs about Carrickfergus Castle in Belfast, Northern Ireland. It was built in the late 1170s and has been in continuous use of the military until 1928. After that, it was used as an air raid shelter in World War II.

Check out these photos of Carrickfergus Castle in Northern Ireland. My two best friends and I visited this castle in June of 2019. 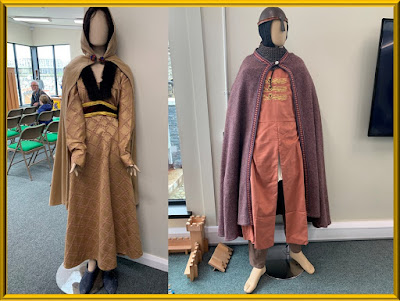 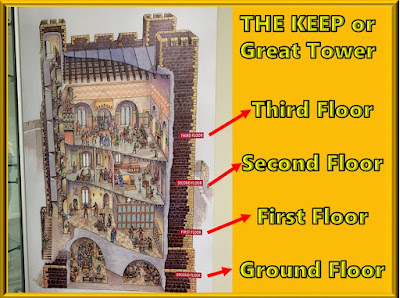 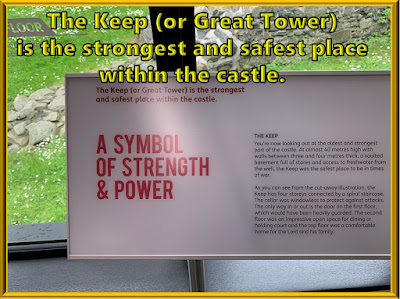 “You are now looking at the oldest and strongest part of the castle. At almost 40 meters high with walls between three and four meters thick, a vaulted basement full of stores and access to freshwater from the well, the keep was the safest place to be in times of war.

As you can see from the illustration, the keep has four storeys connected by a spiral staircase. The cellar was windowless to protect against attacks. The only way in or out is the door on the first floor, which would have been heavily guarded. The second floor was an impressive open space for dining or holding court and the top floor was a comfortable home for the Lord and his family.” 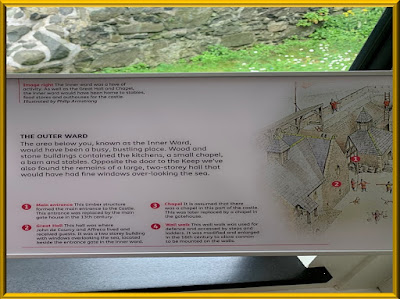 “The area below you, known as the Inner Ward, would have been a busy, bustling place. Wood and stone buildings contained the kitchens, a small chapel, a barn and stables. Opposite the door to the Keep we’ve also found the remains of a large, two-storey hall that would have had fine windows over-looking the sea.” 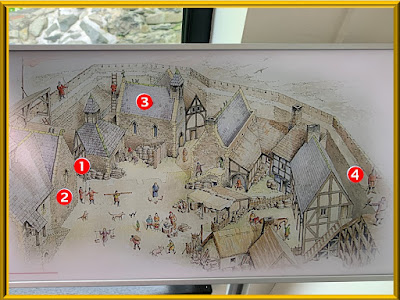 “1. MAIN ENTRANCE: This timber structure formed the main entrance to the Castle. This entrance was replaced by the main gate house in the 13th century.

2. GREAT HALL: This hall was where John de Courcy and Affreca lived and received guests. It was a two storey building with windows overlooking the sea, located beside the entrance gate in the inner ward.

3. CHAPEL: It is assumed that there was a chapel in this part of the castle. This was later replaced by a chapel in the gatehouse.

4. WALL WALK: This wall walk was used for defense and accessed by steps and ladders. It was modified and enlarged in the 16th century to allow cannon to be mounted on the walls.” 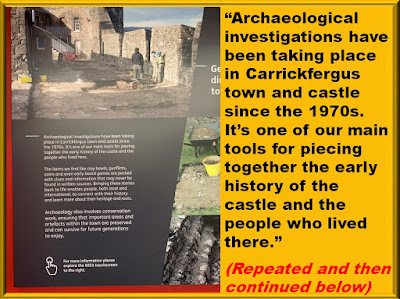 “Archaeological investigations have been taking place in Carrickfergus town and castle since the 1970s. It’s one of our main tools for piecing together the early history of the castle and the people who lived there.

The items we find like clay bowls, gunflints, coins and even early board games are packed with clues and information that may never be found in written sources. Bringing these stories back to life enables people, both local and international, to connect with their history and learn more about their heritage and roots.

Archaeology also involves conservation work, ensuring that important areas and artefacts within the town are preserved and can survive for future generations to enjoy.” 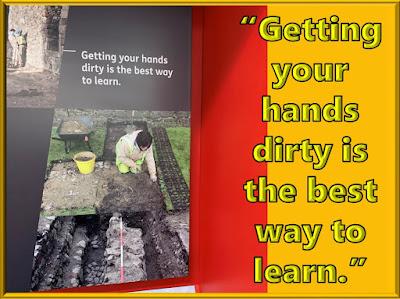 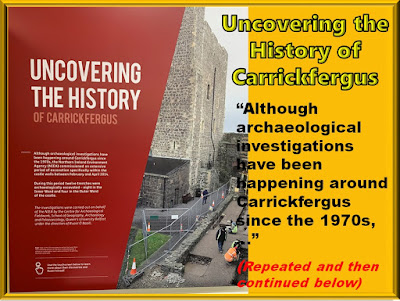 “Although archaeological investigations have been happening around Carrickfergus since the 1970s, the Northern Ireland Environment Agency (NIEA) commissioned an extensive period of excavation specifically within the castle walls between February and April 2014.

During this period twelve trenches were archaeologically excavated – eight in the Inner Ward and four in the Outer Ward of the castle.

The investigations were carried out on behalf of the NIEA by the Centre for Archaeological Fieldwork, School of Geography, Archaeology and Paleoecology, Queen’s University Belfast under the direction of Ruairi O Baoill.” 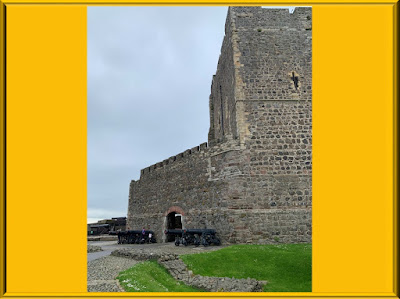 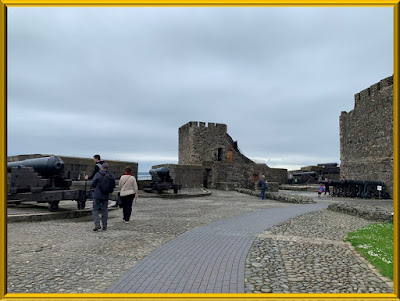 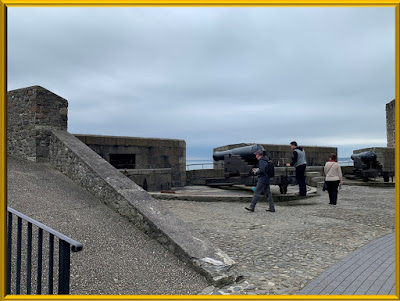 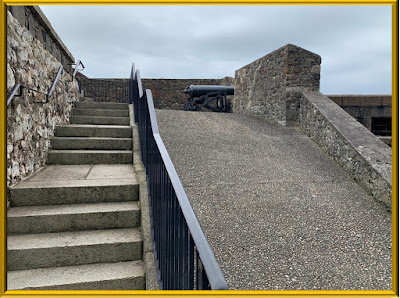 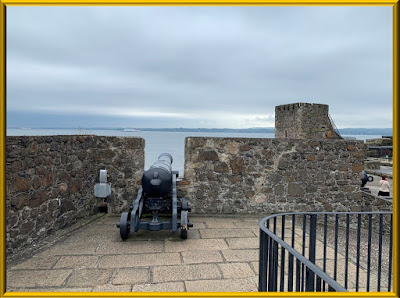 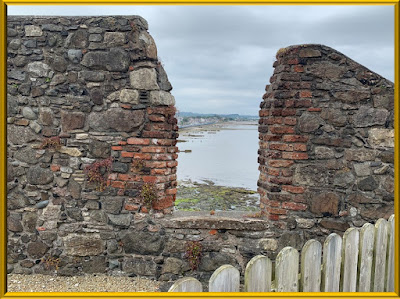 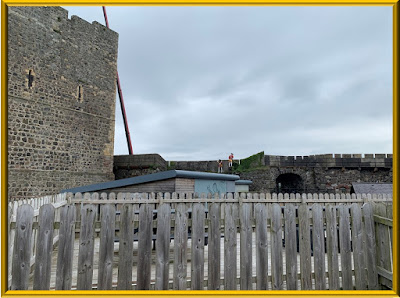 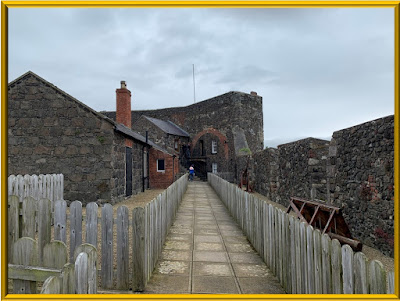 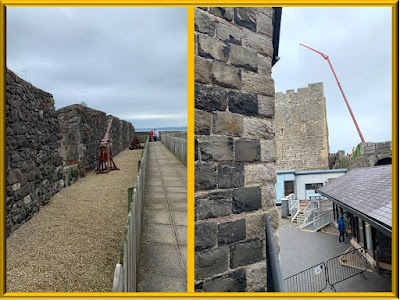 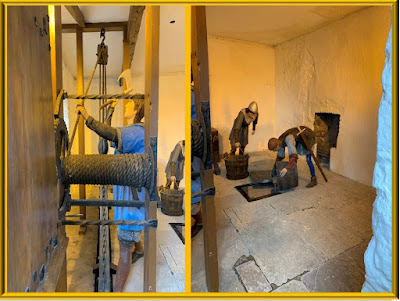 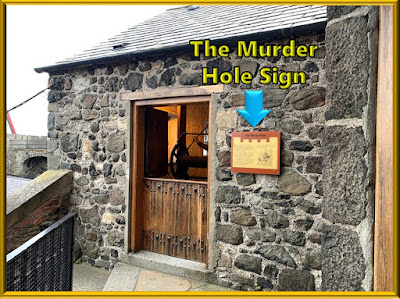 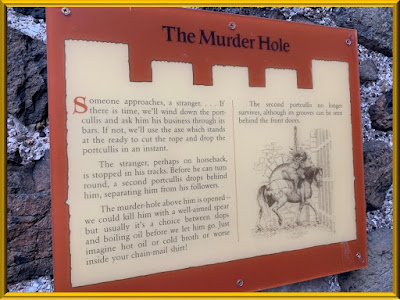 “Someone approaches, a stranger. … If there is time, we’ll wind down the portcullis and ask him his business through its bars. If not, we’ll use the axe which stands at the ready to cut the rope and drop the portcullis in an instant.

The stranger, perhaps on horseback, is stopped in his tracks. Before he can turn around, a second portcullis drops behind him, separating him from his followers.

The murder-hole above him is opened – we could kill him with a well-aimed spear but usually it’s a choice between slops and boiling oil before we let him go. Just imagine hot oil or cold broth or worse inside your chain-mail shirt!

The second portcullis no longer survives, although its groves can be seen behind the front doors.” 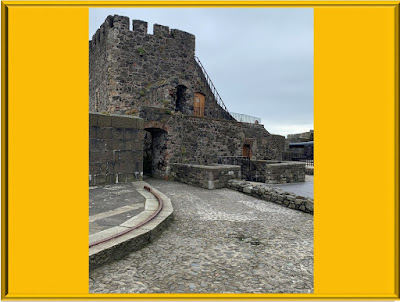 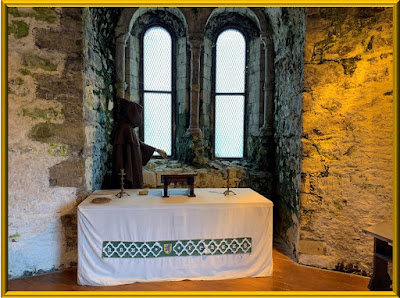 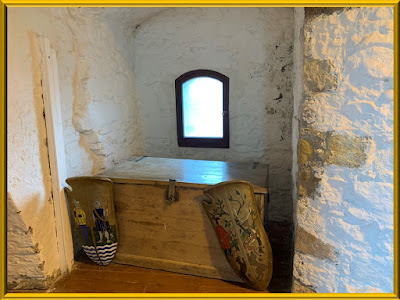 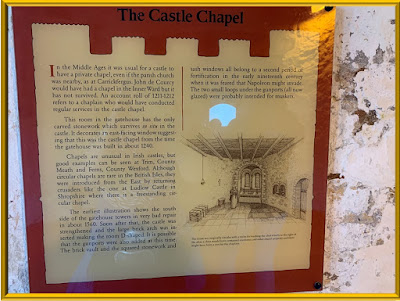 “In the Middle Ages it was usual for a castle to have a private chapel, even if the parish church was nearby, as at Carrickfergus. John de Courcy would have had a chapel in the Inner Ward but it has not survived. An account roll of 1211-1212 refers to a chaplain who would have conducted regular services in the castle chapel.

This room in the gatehouse has the only carved stonework which survives in situ in the castle. It decorates an east-facing window suggesting that this was the castle chapel from the time the gatehouse was build in about 1240.

Chapels are unusual in Irish castles, but good examples can be seen at Trim, County Meath and Ferns, County Wexford. Although circular chapels are rare in the British Isles, they were introduced from the East by returning crusaders like the one at Ludlow Castle in Shropshire where there is a freestanding circular chapel.

The earliest illustration shows the south side of the gatehouse towers in very bad repair in about 1560. Soon after that, the castle was strengthened and the large brick arch was inserted making the room D-shaped. It is possible that the gunports were also added at this time. The brick vault and the squared stonework and sash windows all belong to a second period of fortification in the early nineteenth century when it was feared that Napoleon might invade. The two small loops under the gunports (all now glazed) were probably intended for muskets.

The room was originally circular with a niche for washing the altar vessels on the right of the altar, a chest would have contained vestments and other chapel property and there might have been a seat for the chaplain.” 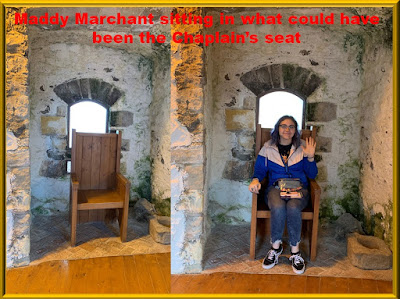 Please visit Parts 1 and 3 and 4 to see more pictures of Carrickfergus Castle. Here are the links. They will open up in a new window.