This is part 3 of 4 blogs about Carrickfergus Castle in Belfast, Northern Ireland. It was built in the late 1170s and has been in continuous use of the military until 1928. After that, it was used as an air raid shelter in World War II.

Check out these photos of Carrickfergus Castle in Northern Ireland. My two best friends and I visited this castle in June of 2019. Their names are Carrie Davis Marchant and her daughter, Maddy Marchant. Maddy is 21. 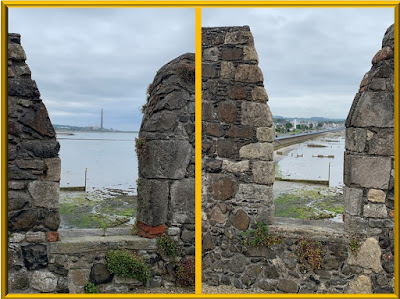 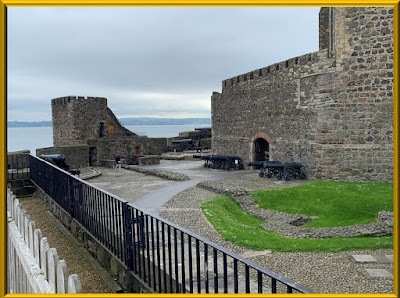 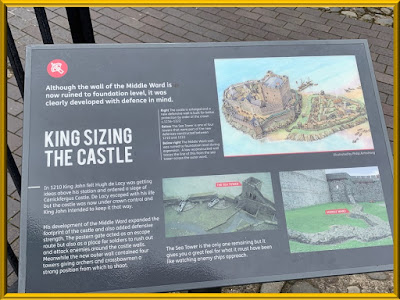 “Although the wall of the Middle Ward is now ruined to foundation level, it was clearly developed with defense in mind.

In 1210 King John felt Hugh de Lacy was getting ideas above his station and ordered a siege of Carrickfergus Castle. De Lacy escaped with his life but the castle was now under crown control and King John intended to keep it that way.

His development of the Middle Ward expanded the footprint of the castle and also added defensive strength. The postern gate acted as an escape route but also as a place for soldiers to rush out and attack enemies around the castle walls. Meanwhile the new outer wall contained four towers giving archers and crossbowmen a strong position from which to shoot.

Right: The castle is enlarged and a new defensive wall is built for better protection by order of the crown c. 1216-1222.

Below: The Sea Tower is one of four towers that were part of the new defenses constructed between 1216 and 1222.

Below right: The Middle Ward wall was ruined to foundation during expansion. A low reconstructed wall traces the line of this from the sea tower across the outer ward.

The Sea Tower is the only one remaining but it gives you a great feel for what it must have been like watching enemy ships approach.” 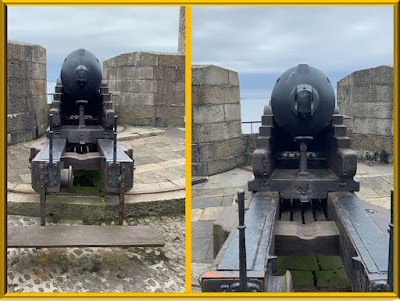 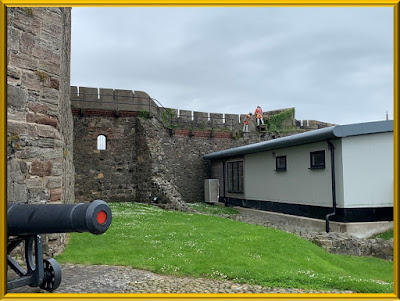 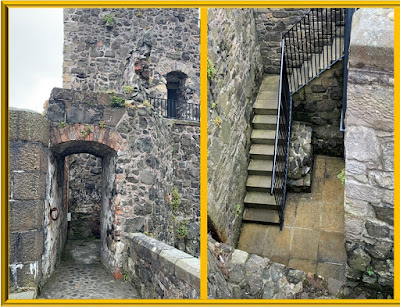 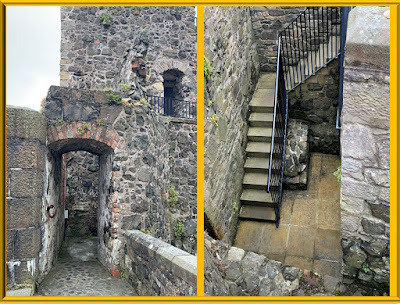 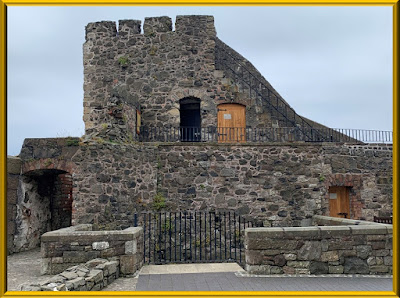 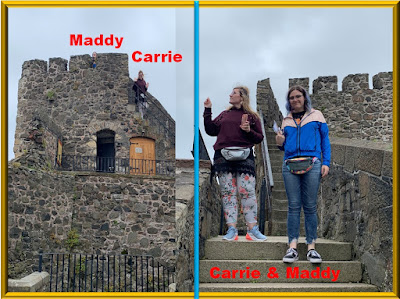 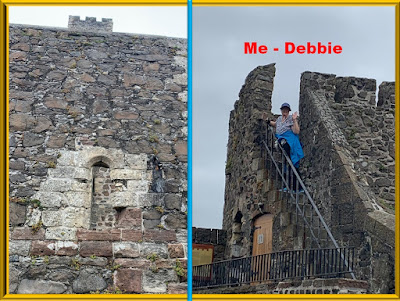 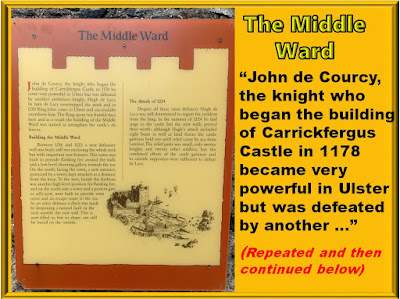 “John de Courcy, the knight who began the building of Carrickfergus Castle in 1178 became very powerful in Ulster but was defeated by another ambitious knight, Hugh de Lacy. In turn de Lacy overstepped the mark and in 1210 King John came to Ulster and successfully overthrew him. The King spent ten fruitful days here and as a result the building of the Middle Ward was started to strengthen the castle’s defenses.”

In 1210 King John felt Hugh de Lacy was getting ideas above his station and ordered a siege of Carrickfergus Castle. De Lacy escaped with his life but the castle was now under crown control and King John intended to keep it that way.

“Between 1216 and 1223 a new defensive wall was built, still not enclosing the whole rock but with important new features. This tower was built to provide flanking fire around the walls and a low-level shooting gallery towards the sea. On the north, facing the town, a new entrance, protected by a tower, kept attackers at a distance from the keep. To the west, beside the harbor, was another high-level position for flanking fire, and on the south side a tower and a postern gate or sally-port, were built to provide extra cover and an escape route to the sea. As an extra defense a ditch was made by deepening a natural fault in the rock outside the new wall. This is now filled in, but its shape can still be traced on the outside.”

Right: The castle is enlarged and a new defensive wall is built for better protection by order of the crown c. 1216-1222.


“Despite all these extra defenses High de Lacy was still determined to regain his earldom from the king. In the summer of 1224 he laid siege to the castle but the new walls proved their worth: although High’s attack included eight boats as well as land forces, the castle garrison held out until relief came by sea from Leinster. The relief party was small, only twenty knights and twenty other soldiers, but the combined efforts of the castle garrison and its outside supporters were sufficient to defeat de Lacy.” 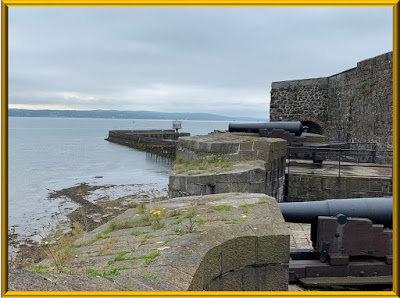 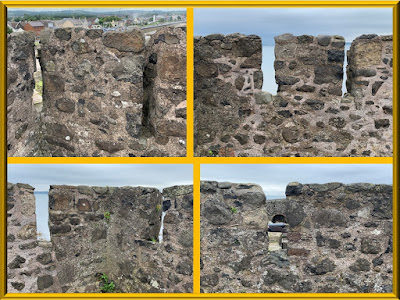 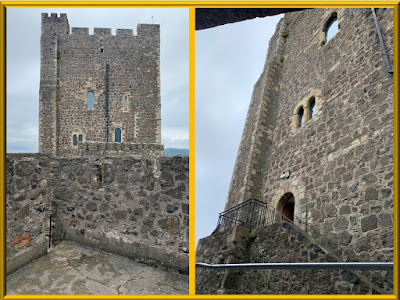 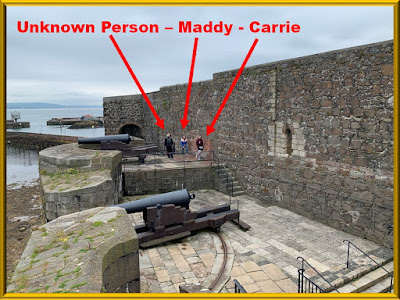 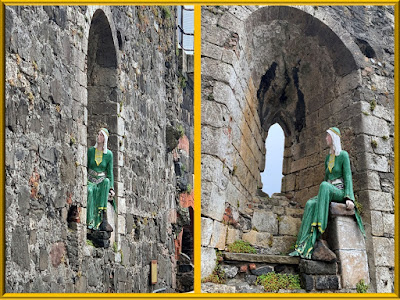 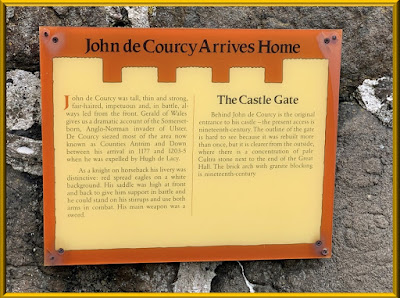 “John de Courcy was tall, think and strong, fair-haired, impetuous, and in battle, always led from the front. Gerald of Wales gives us a dramatic account of the Somersetborn, Anglo-Norman invader of Ulster. De Courcy seized most of the srea now known as Counties Antrim and Down between his arrival in 1177 and 1203-05 when he was expelled by Hugh de Lacy.

As a knight on horseback his livery was distinctive: red spread eagles on a white background. His saddle was high at front and back to give him support in battle and he could stand on his stirrups and use both arms in combat. His main weapon was a sword.”

“Behind John de Councy is the original entrance to his castle – the present access is nineteenth century. The outline of the gate is hard to see because it was rebuilt more than once, but is clearer from the outside, where there is a concentration of pale Cultra stone next to the end of the Great Hall. The brick arch with granite blacking is nineteenth century.” 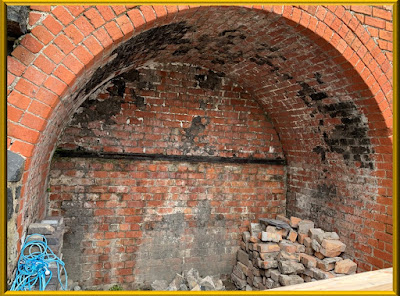 Please visit Parts 1 and 2 and 4 to see more pictures of Carrickfergus Castle. Here are the links. They will open up in a new window.