This is part 1 of 4 blogs about Carrickfergus Castle in Belfast, Northern Ireland. It was built in the late 1170s and has been in continuous use of the military until 1928. After that, it was used as an air raid shelter in World War II.


Check out these photos of Carrickfergus Castle in Northern Ireland. My two best friends and I visited this castle in June of 2019. 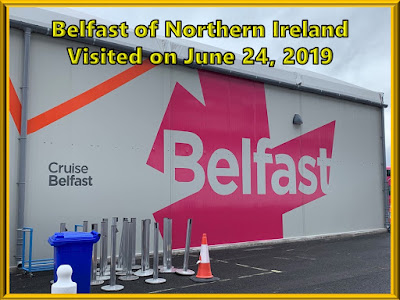 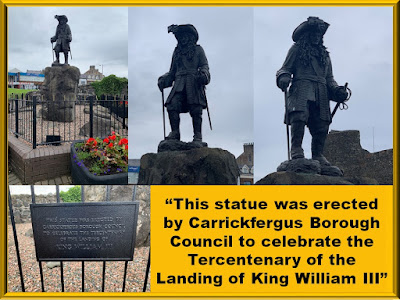 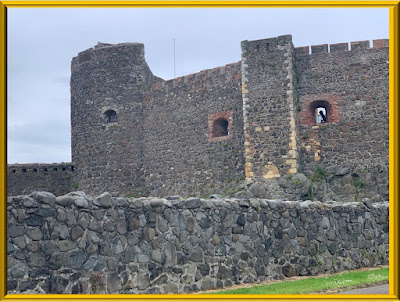 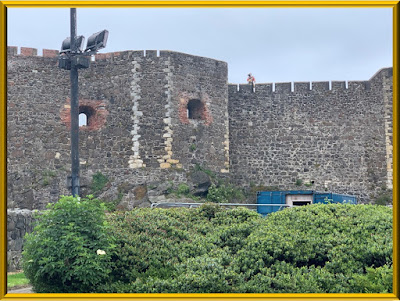 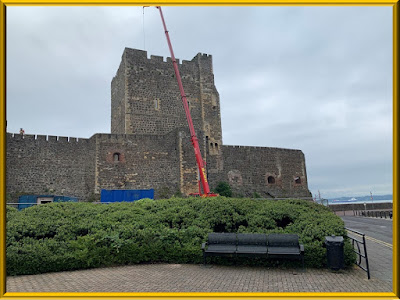 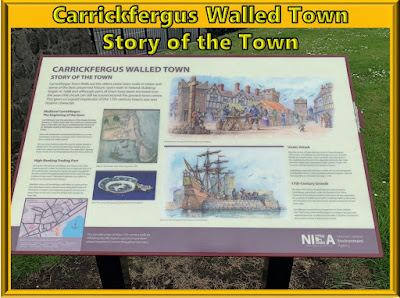 Story of the Town:

“Carrickfergus Town Walls are the oldest storie town walls in Ulster and some of the best preserved historic town walls in Ireland. Building began in 1608 and although parts of them have been removed over the years, the circuit can still be traced around the present town centre. This gives us a good impression of the 17th-century town’s size and historic character.”


Medieval Carrickfergus – The beginning of the town:

“Carrickfergus was the powerbase of the Anglo-Norman Earldom of Ulster. Soon after the castle was constructed (late 1170s), John de Coursy established the Church of St. Nicholas, which is still used as a place of worship today.

There were several other ecclesiastical at, or near, Carrickfergus at the time, including a 13th-century Franciscan friary, a priory and a leper hospital.

The hub of the medieval settlement was the market, located at Market Place. The network of small streets radiating from this reflects the original layout of the town. The castle and St. Nicholas Church are the only surviving buildings from this early settlement.”

“During the 13th century Carrickfergus was listed as one of five important ports in Ulster. The harbor was an important feature of the medieval town, allowing the import and export of goods for the town market and supplying provisions for the castle. The quay is shown on the map of 1560 where it appears as an outline of timber posts enclosing a core of stones.

Wealthier citizens of Carrickfergus could afford to construct their own stone tower houses, situated mainly along High Street and West Street. A modern mural depicting a typical scene at such a tower house can be seen at the end of High Street beside the Town Hall.”

“After the decline of Anglo-Norman power in Ulster during the 14th century, Carrickfergus was the main garrison town and port held by the English Crown. It was constantly under threat from the neighboring Irish and Scots, especially during the late 1500s when the English were attempting to gain control of Ulster. The town was attacked and burnt on several occasions.

Carrickfergus experienced further conflict when it was bombarded by Williamite forces in 1689, assaulted by French troops in 1760 and threatened by an American war ship in 1778.”

“The early 17th century brought expansion and change to Carrickfergus, particularly under the direction of Sir Arthur Chichester who took up residence in the town. He was responsible for a number of building works here, including repairs to the castle, the restoration of St. Nicholas Church and the construction of new town walls.

Carrickfergus remained the principal town in Ulster until the mid-17th century when Belfast began to overtake it as a port and administrative hub. It suffered decline after 1728 when Chichester’s descendants moved to Belfast permanently.” 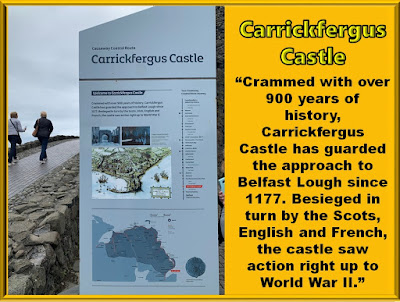 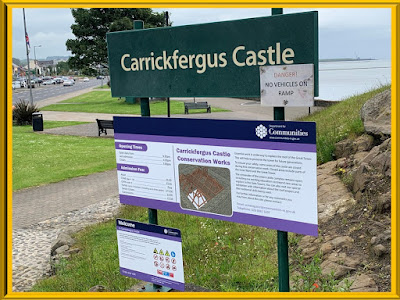 “Essential work is underway to replace the roof of the Great Tower.

This will help to preserve the tower for future generations.

To ensure your safety, some areas of the castle are closed during this conservation work. Closed areas include parts of the Inner Ward and the Great Tower.

The remainder of the entire castle complex remains open, including our exciting education centre and new areas to explore in the Gate Towers. You can also visit our special exhibition with information about the roof project and the traditional sills being used.

For further information or any comments you may have about this site, please contact: 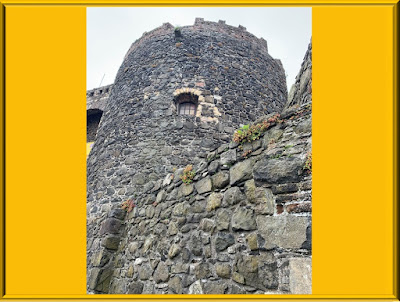 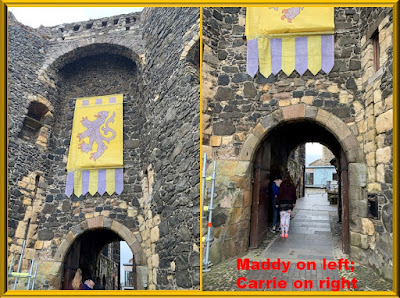 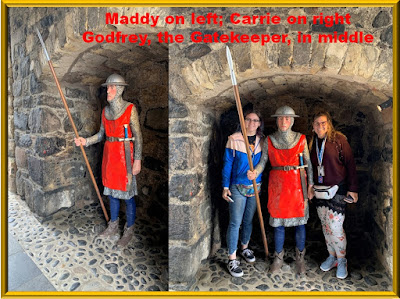 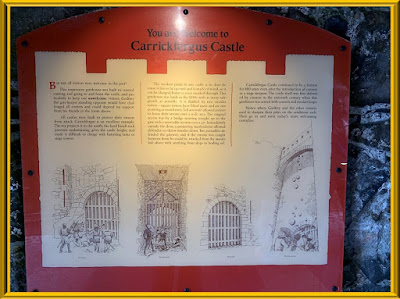 You are welcome to Carrickfergus Castle

“But not all visitors were welcome in the past!

This impressive gatehouse was built to control coming and going to and from the castle, and particularly to keep out unwelcome visitors. Godfrey the gate-keeper standing opposite would have challenged all comers and could depend on support from his friends in the room above.

All castles were built to protect their owners from attack. Carrickfergus is an excellent example. The sea protects it to the south, the hard basalt rock prevents undermining, gives the castle height, and made it difficult to charge with battering rams or siege towers.

The weakest point in any castle is its door because it has to be opened and is made of wood, so it can be charged, burnt or even sneaked through. This gatehouse was built in the 1240s with as many safeguards as possible. It is flanked by two circular towers – square towers were blind spots and are not as strong as round ones. Tall arrowslits allowed archers to loose their arrows over a wide area. The original access was by a bridge running straight up to the gate with a moveable section over a pit. Immediately outside the door, a projecting machicolation allowed defenders to throw missiles down. Two portcullises defended the gateway, and if the enemy was caught between them he could be attacked from the murderhole above with anything from slops to boiling oil.

Carrickfergus Castle contined to be a fortress for 800 years even after the introduction of cannon as a siege weapon. The castle itself was first defended by cannon in the sixteenth century when this gatehouse was armed with cannon and musket loops.

Notice where Godfrey and the other sentries used to sharpen their pikes on the sandstone arch. Then go in and meet today’s more welcoming custodians.” 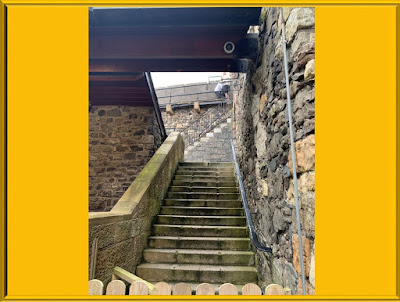 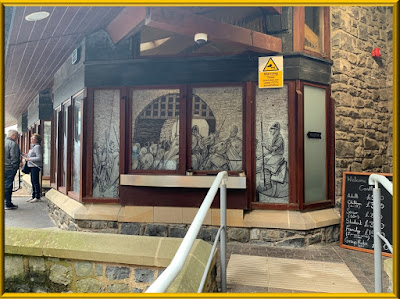 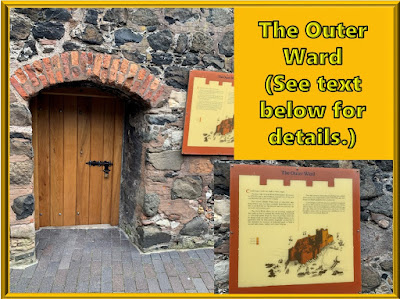 The first stage or Inner Ward, built by John de Courcy in 1178-1195, was at the southern, seaward end of the rock and included the great tower or keep.

The second, Middle Ward, built in 1216-1223, after King John’s visit, has been partially demolished but its line is marked out on the ground and you can visit the sea tower and postern gate.

The Outer Ward, where you are standing, completed the castle so that it covered the whole rock. It was built in 1226-1242 under Hugh de Lacy or possibly under the Burgh Earls of Ulster. It most striking feature is the gatehouse with its twin towers, original circular but it also doubled the amount of defended space to hold a second hall, stores, stables and more lodgings.

Over the centuries these minor buildings were rebuilt many times, most importantly in the 1560s when gun platforms and brick gunports were constructed.

Carrickfergus Castle was used as a military stronghold for almost 800 years. In your tour of the castle you will be able to meet a few of its inhabitants, soldiers of every age, but also John de Courcy, King John and Con O’Neill. Compare notes with its present day inhabitants to see whether you have found them all.” 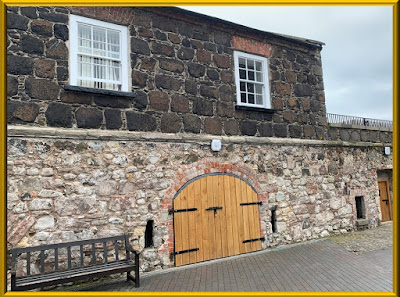 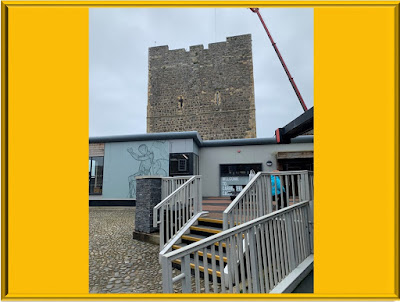 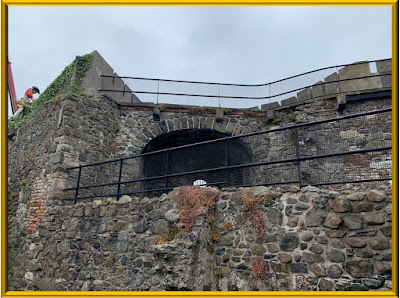 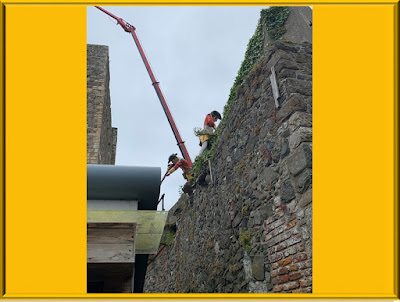 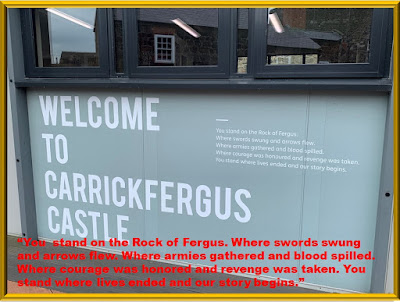 “You stand on the Rock of Fergus.
Where swords swung and arrows flew.
Where armies gathered and blood spilled.
Where courage was honored and revenge was taken.
You stand where lives ended and our story begins.” 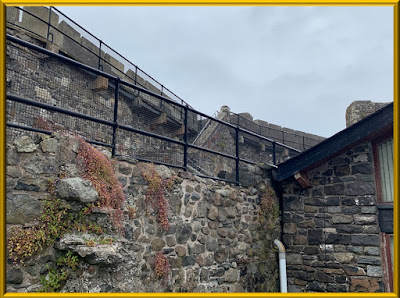 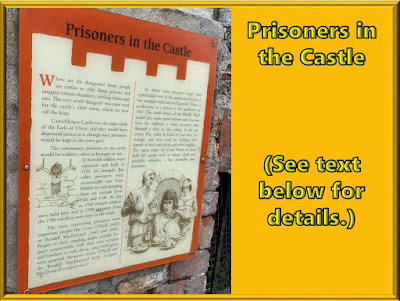 Prisoners in the Castle:

“Where are the dungeons? Some people see castles as cold, damp prisons and imagine torture chambers, rattling chains and rats. The very word ‘dungeon’ was once used for the castle’s chief tower, which we now call the keep.

Carrickfergus Castle was the main castle of the Earls of Ulster, and they would have dispensed justice in it, though most prisoners would be kept in the town gaol.

The commonest prisoners in the castle would be soldiers, taken as hostages in war – 30 Scottish soldiers were captured and held in 1316, for example. But other prisoners were occasionally sent from Dublin for safe-keeping, there are records from 1326 and 1346. As late as 1760 French soldiers were held here and in 1799 prisoners from the 1798 rebellion were kept in the castle.

The most interesting prisoners were important people like Conn O’Neill (1603) or Randall McDonnell (1642 and 1643). People of their standing might actually live quite comfortably, with their own servants and freedom to walk about, since both gates were guarded. However Conn O’Neill and the Randall MacDonnell both escaped, MacDonnel escaped twice!

So where were prisoners kept? One typical place was in the gatehouse because it was strongly built and well guarded. There is a reference to a prison in the gatehouse in 1567. The small towers of the Middle Ward would also make good prisons and you can view the oubliette, a room accessed only through a door in the ceiling, in the sea tower. The vaults in front of you were for storage, and were used for holding fuel, barrels of food and drink and other supplies. The vaults under the Great Tower or keep held dry goods such as wheat, cloth and possibly valuables – but probably not prisoners.” 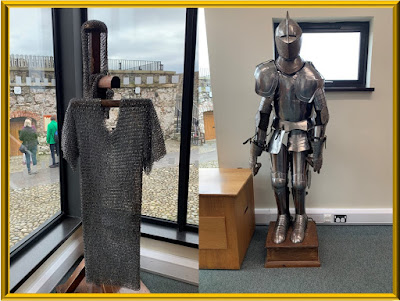 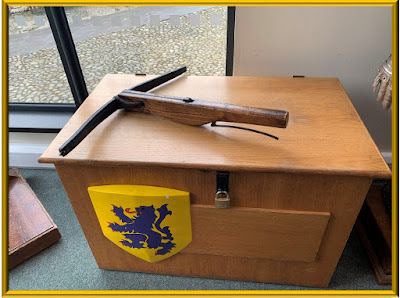 Please visit Parts 2 and 3 and 4 to see more pictures of Carrickfergus Castle. Here are the links. They will open up in a new window.