Dachau Concentration Camp Memorial Tour photos and things learned- part 3. A tragic and heartbreaking time in history of the Holocaust and all those forced to take part.

Every prisoner of the Dachau Concentration Camp has a tragic and heartbreaking tale to tell. These are just a few of those documented stories. In some cases, the tale is accompanied by some of the "EFFECTS" that were forcibly taken from them.

In case you can't read the text on the pictures, I will type them below each picture. 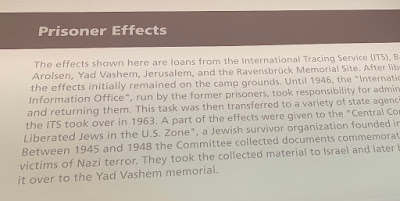 "The effects shown here are loans from the International Tracing Service (ITS), Bad Arolsen, Yad Vashem, Jerusalem, and the Ravensbruck Memorial Site. After liberation, the effects initially remained on the camp grounds. Until 1946, the 'International Information Office', run by the former prisoners, took responsibility for administering and returning them. This task was then transferred to a variety of state agencies until the ITS took over in 1963. A part of the effects were given to the 'Central Committee of Liberated Jews in the U.S. Zone', a Jewish survivor organization founded in Munich. Between 1945 and 1948 the Committee collected documents commemorating the victims of Nazi terror. They took the collected material to Israel and later handed it over to the Yad Vashem memorial." 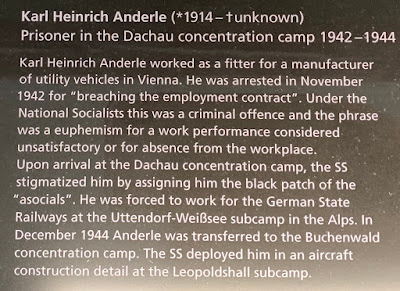 "Karl Heinrich Anderle worked as a fitter for a manufacturer of utility vehicles in Vienna. He was arrested in November 1942 for 'breaching the employment contract'. Under the National Socialists this was a criminal offence and the phrase was a euphemism for a work performance considered unsatisfactory or for absence from the workplace. Upon arrival at the Dachau concentration camp, the SS stigmatized him by assigning him the black patch of the 'asocials'. He was forced to work for the German State Railways at the Uttendorf-WeiBsee subcamp in the Alps. In December 1944 Anderle was transferred to the Buchenwald concentration camp. The SS deployed him in an aircraft construction detail at the Leopoldshall subcamp." 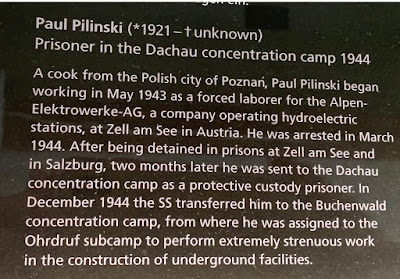 
"A cook from the Polish city of Poznan, Paul Pilinski began working in May 1943 as a forced laborer for the Alpen-Electrowerke-AG, a company operating hydroelectric stations, at Zell am See in Austria. He was arrested in March 1944. After being detained in prisons at Zell am See and in Salzburg, two months later he was sent to the Dachau concentration camp as a protective custody prisoner. In December 1944 the SS transferred him to the Buchenwald concentration camp, from where he was assigned to the Ohrdruf subcamp to perform extremely strenuous work in the construction of underground facilities." 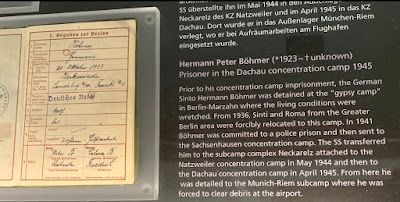 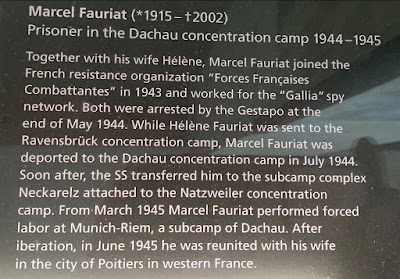 "Together with his wife Helene, Marcel Fauriat joined the French resistance organization 'Forces Francaises Combattantes' in 1943 and worked for the 'Gallia' spy network. Both were arrested by the Gestapo at the end of May 1944. While Helene Fauriat was sent to the Ravensbruck concentration camp, Marcel Fauriat was deported to the Dachau concentration camp in July 1944. Soon after, the SS transferred him to the subcamp complex Neckarelz attached to the Natzweiler concentration camp. From March 1945 Marcel Fauriat performed forced labor at Munich-Riem, a subcamp of Dachau. After liberation, in June 1945 he was reunited with his wife in the city of Poitiers in western France." 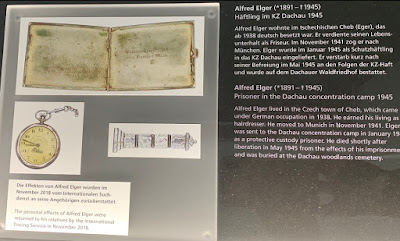 "Alfred Elger lived in the Czech town of Cheb, which came under German occupation in 1938. He earned his living as a hairdresser. He moved to Munich in November 1941. Elger was sent to the Dachau concentration camp in January 1945 as a protective custody prisoner. He died shortly after liberation in May 1945 from the effects of his imprisonment and was buried at the Dachau woodlands cemetery." 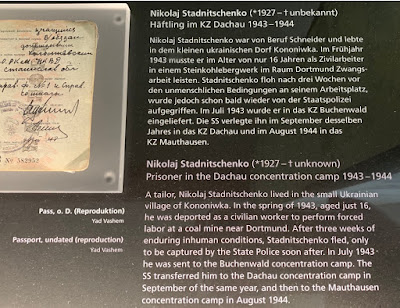 "A tailor, Nikolaj Stadnitschenko lived in the small Ukrainian village of Kononiwka. In the spring of 1943, aged just 16, he was deported as a civilian worker to perform forced labor at a coal mine near Dortmund. After three weeks of enduring inhuman conditions, Stadnitschenko fled, only to be captured by the State Police soon after. In July 1943 he was sent to the Buchenwald concentration camp. The SS transferred him to the Dachau concentration camp in September of the same year, and then to the Mauthausen concentration camp in August 1944." 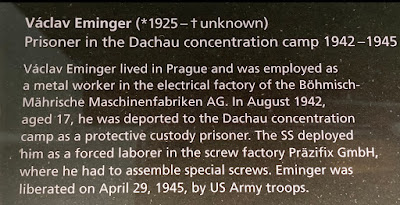 "Vaclav Eminger lived in Prague and was employed as a metal worker in the electrical factory of the Bohmisch-Mahrische Maschinenfabriken AG. In August 1942, aged 17, he was deported to the Dachau concentration camp as a protective custody prisoner. The SS deployed him as a forced laborer in the screw factory Prazifix GmbH, where he had to assemble special screws. Eminger was liberated on April 29, 1945, by US Army troops." 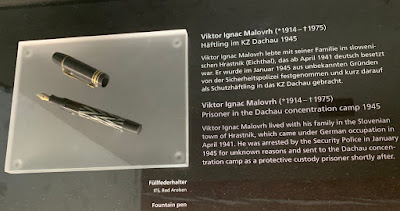 "Viktor Ignac Malovrh lived with his family in the Slovenian town of Hrastnik, which came under German occupation in April 1941. He was arrested by the Security Police in January 1945 for unknown reasons and sent to the Dachau concentration camp as a protective custody prisoner shortly after." 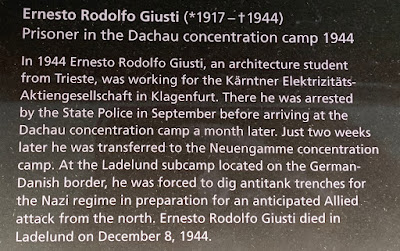 "In 1944 Ernesto Rodolfo Giusti, an architecture student from Trieste, was working for the Karntner Elektrizitats-Aktiengesellschaft in Klagenfurt. There he was arrested by the State Police in September before arriving at the Dachau concentration camp a month later. Just two weeks later he was transferred to the Neuengamme concentration camp. At the Ladelund subcamp located on the German-Danish border, he was forced to dig antitank trenches for the Nazi regime in preparation for an anticipated Allied attack from the north. Ernesto Rodolfo Giusti died in Ladelund on December 8, 1944." 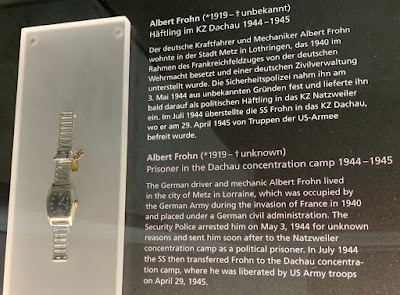 "The German driver and mechanic Albert Frohn lived in the city of Metz in Lorraine, which was occupied by the German Army during he invasion of France in 1940 and placed under a German civil administration. The Security Police arrested him on May 3, 1944 fro unknown reasons and sent him soon after to the Natzweiler concentration camp as a political prisoner. In July 1944 the SS then transferred Frohn to the Dachau concentration camp, where he was liberated by US Army troops on April 29, 1945." 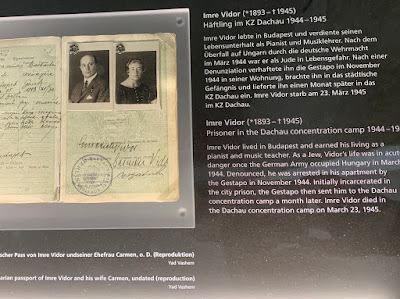 "Imre Vidor lived in Budapest and earned his living as a pianist and music teacher. As a Jew, Vidor's life was in acute danger once the German Army occupied Hungary in March 1944. Denounced, he was arrested in his apartment by the Gestapo in November 1944. Initially incarcerated in the city prison, the Gestapo then sent him to the Dachau concentration camp a month later. Imre Vidor died in the Dachau concentration camp on March 23, 1945." 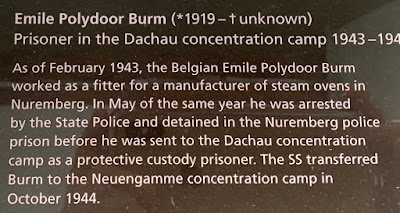 "As of February 1943, the Belgium Emile Polydoor Burm worked as a fitter for a manufacturer of steam ovens in Nuremberg. In May of the same year he was arrested by the State Police and detained in the Nuremberg police prison before he was sent to the Dachau concentration camp as a protective custody prisoner. The SS transferred Burm to the Neuengamme concentration camp in October 1944." 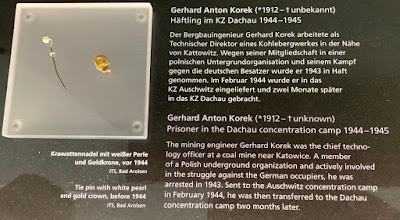 Photo: The pin with white peral and gold crown, before 1944

"The mining engineer Gerhard Korek was the chief technology officer at a coal mine near Katowice. A member of a Polish underground organization and actively involved in the struggle against the German occupiers, he was arrested in 1943. Sent to the Auschwitz concentration camp in February 1944, he was then transferred to the Dachau concentration camp two months later." 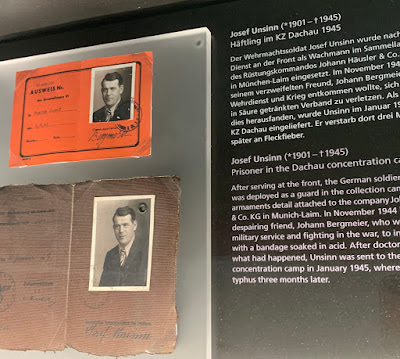 "After serving at the front, the German soldier Josef Unsinn was deployed as a guard in the collection camp VI of the armaments detail attached to the company Johann Hausler & Co. KG in Munich-Laim. In November 1944 he helped his despairing friend, Johann Bergmeier, who wanted to avoid military service and fighting in the war, to injure himself with a bandage soaked in acid. After doctors found out what had happened, Unsinn was sent to the Dachau concentration camp in January 1945, where he died of typhus three months later."

Photo of Sebastian Wefzger (1900-1933), who was murdered in the Dachau concentration camp

"Taken during the forensic post-mortem examination, May 30, 1933

According to information from fellow-prisoners, the Munich salesman, Sebastian Nefzger, was a member of the NSDAP and arrested for embezzling SS funds. On May 25-26, 1933, he was murdered by SS men in his detention cell. The act was disguised as a suicide."