This is part 4 of 4 blogs about Carrickfergus Castle in Belfast, Northern Ireland. It was built in the late 1170s and has been in continuous use of the military until 1928. After that, it was used as an air raid shelter in World War II.

Check out this final set of photos of Carrickfergus Castle in Northern Ireland. My two best friends and I visited this castle in June of 2019. Their names are Carrie Davis Marchant and her daughter, Maddy Marchant. Maddy is 21. 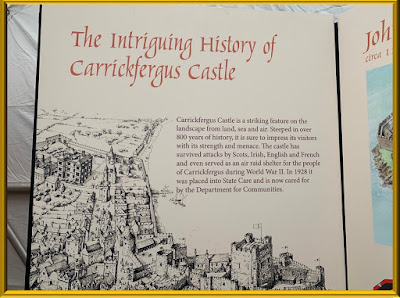 The Intriguing History of Carrickfergus Castle:

“Carrickfergus Castle is a striking feature on the landscape from land, sea and air. Steeped in over 800 years of history, it is sure to impress its visitors with its strength and menace. The castle has survived attacks by Scots, Irish, English and French and even served as an air raid shelter for the people of Carrickfergus during World War II. In 1928, it was placed into State Care and is now cared for by the Department for Communities.” 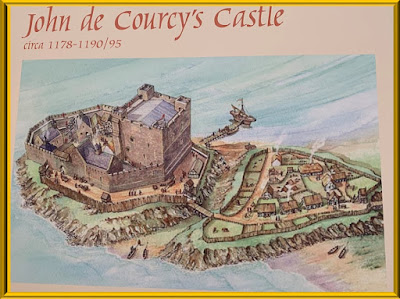 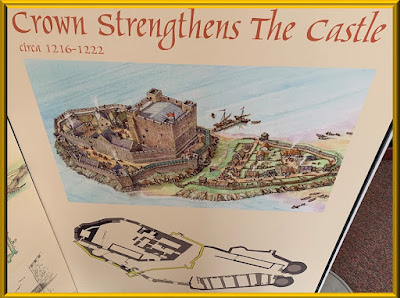 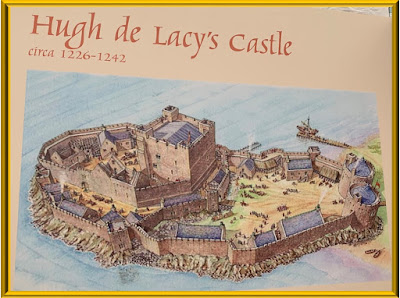 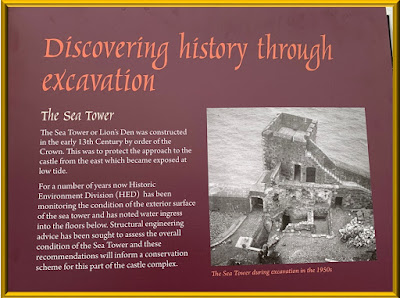 “The Sea Tower at Lion’s Den was constructed in the early 13th Century by order of the crown. This was to protect the approach to the castle from the east which became exposed at low tide.

For a number of years now Historic Environment Division (HED) has been monitoring the condition of the exterior surface of the sea tower and has noted water ingress into the floors below. Structural engineering advice has been sought to assess the overall condition of the Sea Tower and these recommendations will inform a conservation scheme for this part of the castle complex.” 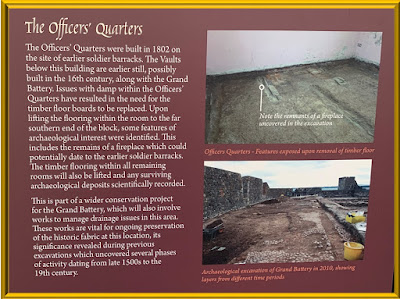 “The Officers’ Quarters were built in 1802 on the site of earlier soldier barracks. The Vaults below this building are earlier still, possibly built in the 16th century, along with the Grand Battery. Issues with damp within the Officers’ Quarters have resulted in the need for the timber floor boards to be replaced. Upon lifting the flooring within the room to the far southern end of the block, some features of archaeological interest were identified. This includes the remains of a fireplace which could potentially date to the earlier soldier barracks. The timber flooring within all remaining rooms will also be lifted and any surviving archaeological deposits scientifically recorded.

This is part of a wider conservation project for the Grand Battery, which will also involve works to manage damage issues in this area. These works are vital for ongoing preservation of the historic fabric at this location, its significance revealed during previous excavations which uncovered several phrases of activity dating from late 1500s to the 19th century.” 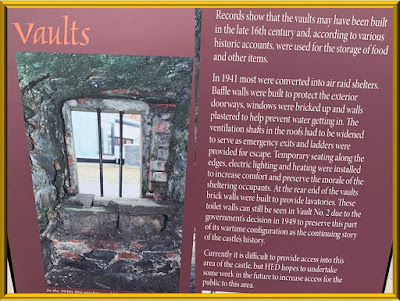 
CAPTION BELOW PICTURE: “In the 1940s this window would have been bricked up to prevent against bomb blasts from air strikes.”

“Records show that the vaults may have been built in the later 16th century and according to various historic accounts, were used for the storage of food and other items.

In 1941 most were converted into air raid shelters,. Baffle walls were built to protect the exterior doorways, windows were bricked up and walls plastered to help prevent water getting in. The ventilation shafts in the roofs had to be widened to serve as emergency exits and ladders were provided for escape. Temporary seating along the edges, electric lighting and heating were installed to increase comfort and preserve the morale of the sheltering occupants. At the rear end of the vaults, brick walls were built to provide laboratories. These toilet walls can still be seen in Vault No. 2 due to the government’s decision in 1949 to preserve this part of the wartime configuration as the continuing story of the castle’s history.

Currently it is difficult to provide assess into this area of the castle, but HED hopes to undertake some work in the future to increase access for the public to this area.” 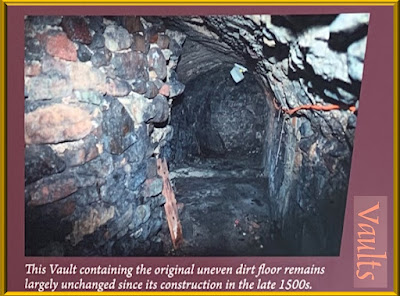 “This Vault containing the original uneven dirt floor remains largely unchanged since its construction in the late 1500s.” 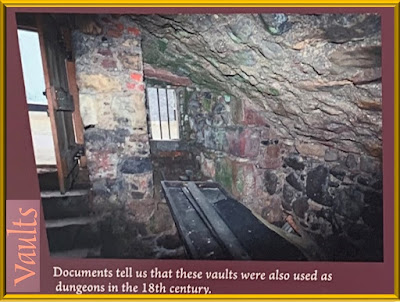 “Documents tell us that these vaults were also used as dungeons in the 18th century.” 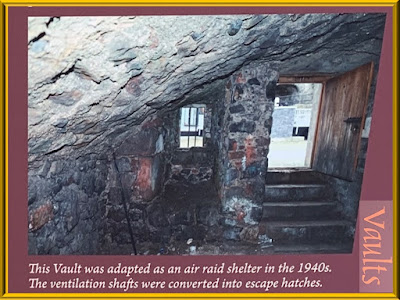 “This Vault was adapted as an air raid shelter in the 1940s. The ventilation shafts were converted into escape hatches.” 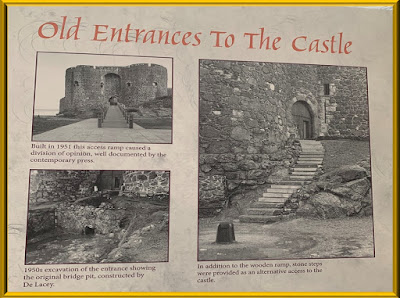 “Built in 1951, this access ramp caused a division of opinion, well documented by the contemporary press.”

“In addition to the wooden ramp, stone steps were provided as an alternative access to the castle.” 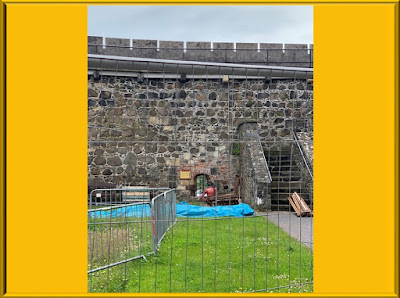 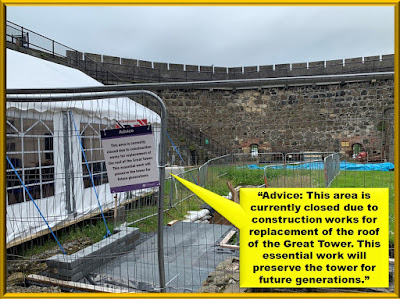 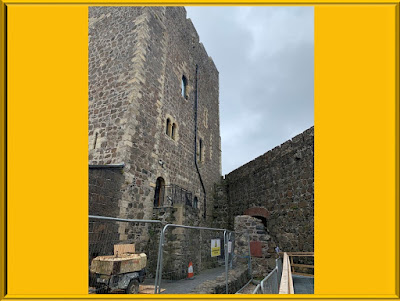 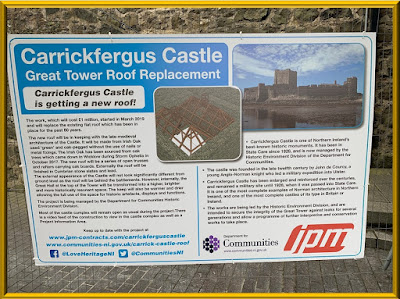 “Carrickfergus Castle is getting a new roof!

The work, which will cost 1 million pounds sterling, started in March 2019 and will replace the existing flat roof which has been in place for the past 80 years.

The new roof will be in keeping with the late-medieval architecture of the Castle. It will be made from Irish Oak used ‘green’ and oak-pegged without the use of nails or metal fixings. The Irish Oak has been sourced from oak trees which came down in Wicklow during Storm Ophelia in October 2017. The new roof will be a series of open trusses and rafters carrying oak boards. Externally the roof will be finished in Cumbrian stone slates and lead.

The new roof will be in keeping with the late-medieval architecture of the Castle. It will be made from Irish Oak used ‘green’ and oak-pegged without the use of nails or metal fixings. The Irish Oak has been sourced from oak trees which came down in Wicklow during Storm Ophelia in October 2017. The new roof will be a series of open trusses and rafters carrying oak boards. Externally the roof will be finished in Cumbrian stone slates and lead.

The project is being managed by the Department for Communities Historic Environment Division.

● Carrickfergus Castle is one of Northern Ireland’s best-known historic monuments. It has been in State Care since 1928, and is now managed by the Historic Environment Division of the Department for Communities.

● The castle was founded in the late twelfth century by John de Courcy, a young Anglo-Norman knight who led a military expedition into Ulster.

● The works are being led by the Historic Environment Division, and are intended to secure the integrity of the Great Tower against leaks for several generations and allow a programme of further interpretive and conservation works to take place.” 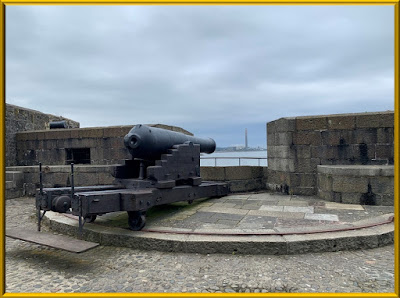 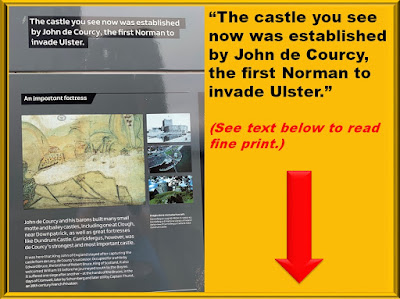 “John de Councy and his barons built many small motte and bailey castles, including one at Clough, near Downpatrick, as well as great fortresses like Dundrum Castle. Carrickfergus, however, was de Courcy’s strongest and most important castle.”

“It was here that King John of England stayed after capturing the castle from de Lacy, de Courcy’s successor. Occupied for a while by Edward Bruce, the brother of Robert Bruce, King of Scotland, it also welcomed William III before he journeyed south to the Boyne. It suffered one siege after another – at the hands of the Bruces, in the days of Cromwell, later by Schomberg and later still by Captain Thurot, an 18th century French Privateer.” 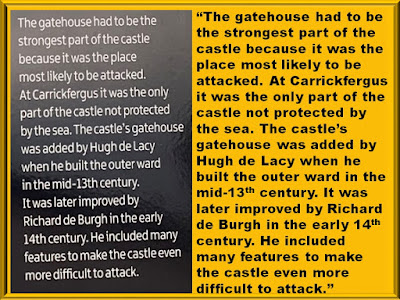 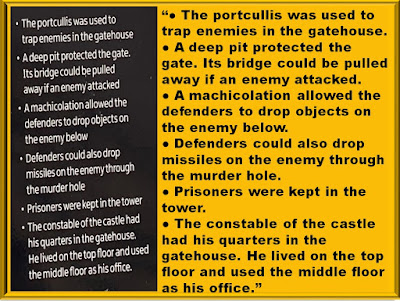 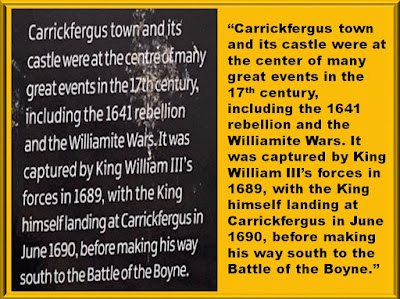 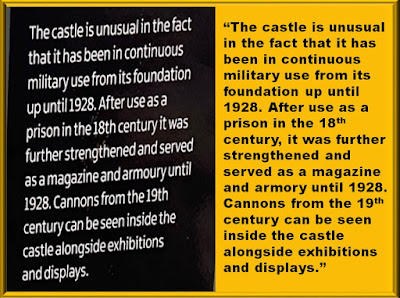 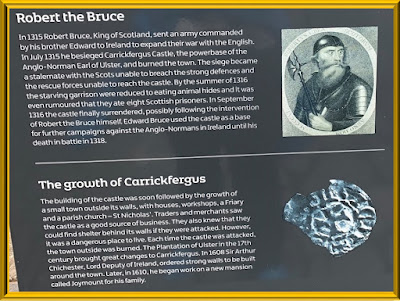 “In 1315 Robert Bruce, King of Scotland, sent an army commanded by his brother Edward to Ireland to expand their war with the English. In July 1315 he besieged Carrickfergus Castle, the powerbase of the Anglo-Norman Earl of Ulster, and burned the town. The siege became a stalemate with the Scots unable to breach the strong defenses and the rescue forces unable to reach the castle. By the summer of 1316, the starving garrison were reduced to eating animal hides and it was even rumored that they ate eight Scottish prisoners. In September 1316 the castle finally surrendered, possibly following the intervention of Robert the Bruce himself. Edward Bruce used the castle as a base for further campaigns against the Anglo-Normans in Ireland until his death in battle in 1318.”


The growth of Carrickfergus:


“The building of the castle was soon followed by the growth of a small town outside its walls, with houses, workshops, a Friary and a parish church – St. Nicholas. Traders and merchants saw the castle as a good source of business. They also knew that they could find shelter behind its walls if they were attacked. However, it was a dangerous place to live. Each time the castle was attacked, the town outside was burned. The Plantation of Ulster in the 17th century brought great changes to Carrickfergus. In 1608 Sir Arthur Chichester, Lord Deputy of Ireland, ordered strong walls to be built around the town. Later, in 1610, he began work on a new mansion called Joymount for his family.” 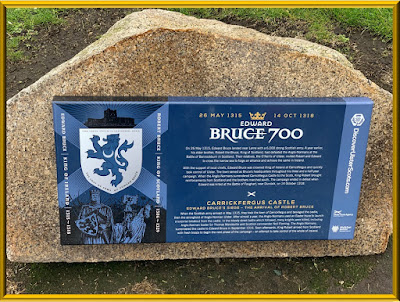 “On 26 May 1315, Edward Bruce landed near Larne with a 6,000 strong Scottish army. A year earlier, his elder brother, Robert the Bruce, King of Scotland, had defeated the Anglo-Normans at the Battle of Bannockburn in Scotland. Their relatives, the O’Neills of Ulster, invited Robert and Edward to cross the narrow sea to forge an alliance and achieve the same in Ireland.

With the support of local chiefs, Edward Bruce was crowned King of Ireland at Carrickfergus and quickly took control of Ulster. The town served as Bruce’s headquarters throughout his three and a half year campaign. When the Anglo-Normans surrendered Carrickfergus Castle to the Scots, King Robert brought reinforcements from Scotland and the brothers marched south. The campaign ended in defeat when Edward was killed at the Battle of Faughart, near Dundarlk, on 14 October 1318.”


“When the Scottish army arrived in May 1315, they took the town of Carrickfergus and besieged the castle, then the stronghold of Anglo-Norman Ulster. After almost a year, the Anglo-Normans used an Easter truce to launch a surprise breakout from the castle. In the bloody street battle which followed, many knights were killed, including Anglo-Norman leader Sir Thomas Mandeville and Scottish commander Neil Fleming. The Anglo-Normans surrendered the castle to Edward Bruce in September 1316. Soon afterwards, King Robert arrived from Scotland with fresh troops to begin the next phase of the campaign – an attempt to take control of the whole of Ireland.” 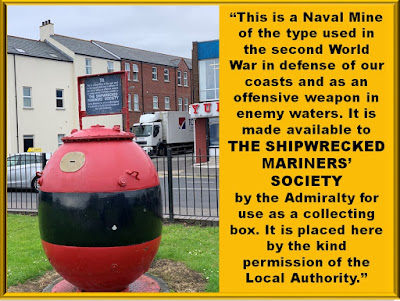 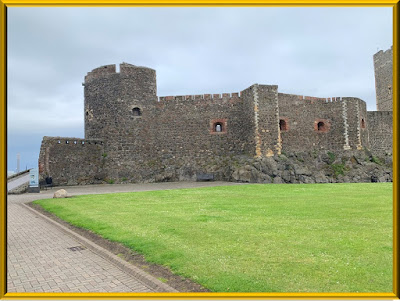 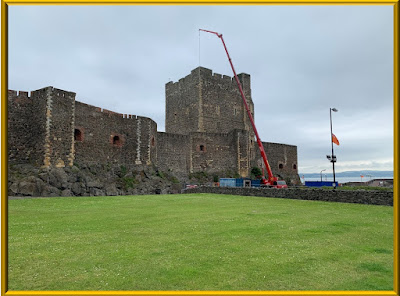 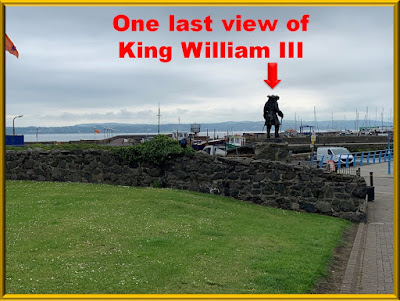 Please visit Parts 1 and 2 and 3 to see more pictures of Carrickfergus Castle. Here are the links. They will open up in a new window.